The Autumn Meeting in Utrecht on October 14th 2012.

About 30 bromeliad enthusiasts got together in the conservatory of the Utrecht Botanical Gardens around 10am. Eric Gouda, the chairman, and Roel Tomassen, the secretary, were present on behalf of the Board. Piet van Beest, the treasurer, was unable to attend. Five new members were welcomed, very good news in a time when so many societies see their membership shrinking. This brought our total membership up to 76. It often turns out that new members have already had something to do with bromeliads because of hobbies such as paludaria, orchids and such like. Eric concluded that this kind of interest coming from different angles is really good and can enrich everyone's knowledge of bromeliad cultivation though the exchange of widely differing experiences. 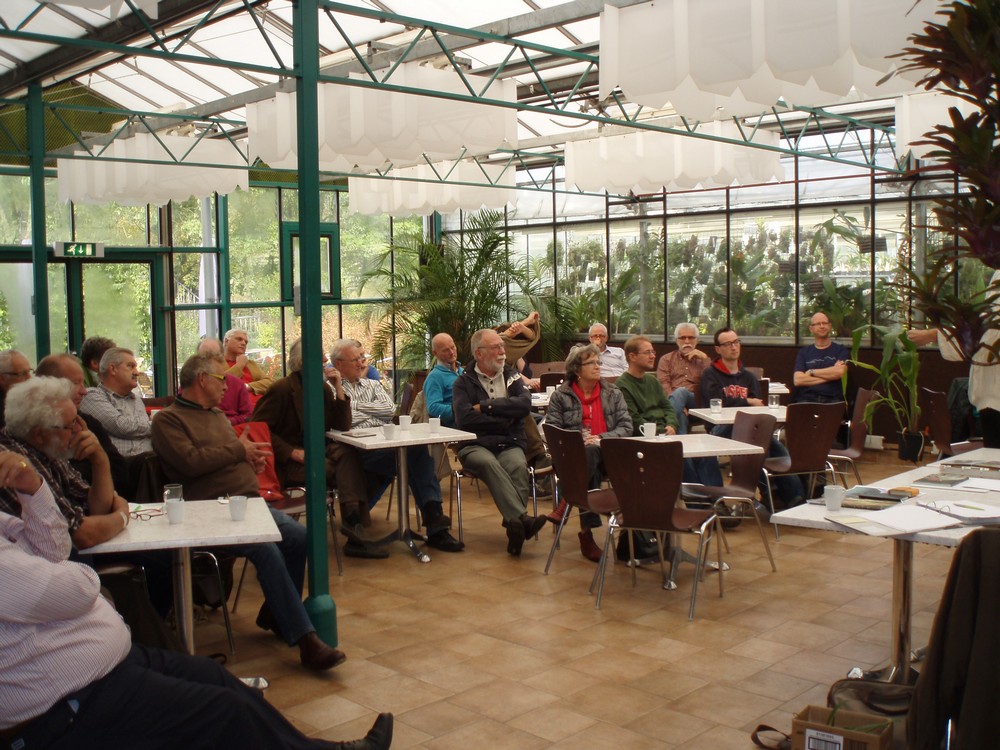 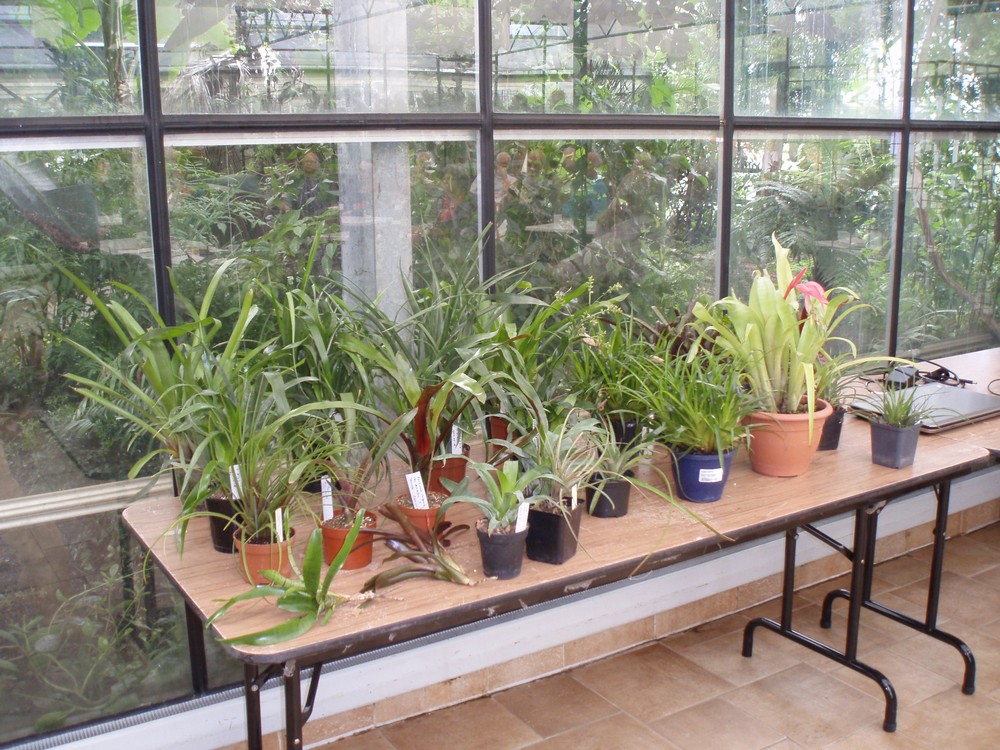 Photos taken during the meeting

The Board proposed the following dates for the 2013 meetings:

As far as possible, we try to take account of other activities and of personal preferences so do let us know if these dates cause problems.

We reported that our Society finances are healthy. As far as we knew, all outstanding subscriptions had been paid. Next time the treasurer will be able to give a more detailed report of the situation.

The Board then asked those members present about their views on, and their experiences with, the recently-introduced wiki-document. Participation so far by the members could only be called poor and everyone was called on to share their experiences with cultivating plants, their travels and visits to nurseries with others by adding them to the wiki. Eric has explained how it all works but extra help is available at any time. Several stories about cultivating various kinds of bromeliad will be added in the near future.

The new magazine The Potting Shed Observer (New Zealand) on the BCG website might be interesting for fervent Tillandsia-lovers. See: documentation on our site.

Attention was drawn to the, currently very extensive, seed list, which members make little use of at present. In the past member Albert Ebbink used to sow a lot of seed for the Society and the members could then buy the young plants he brought along for very low prices. However, Albert has no time for this at present. The Board will look into whether or not another solution can be found. Nonetheless, for the hobbyist it is a lot of fun to try one's hand with seeds. Any seeds the plant forms can be given to Eric and, if desired, exchanged for other seeds. See: seedEx. 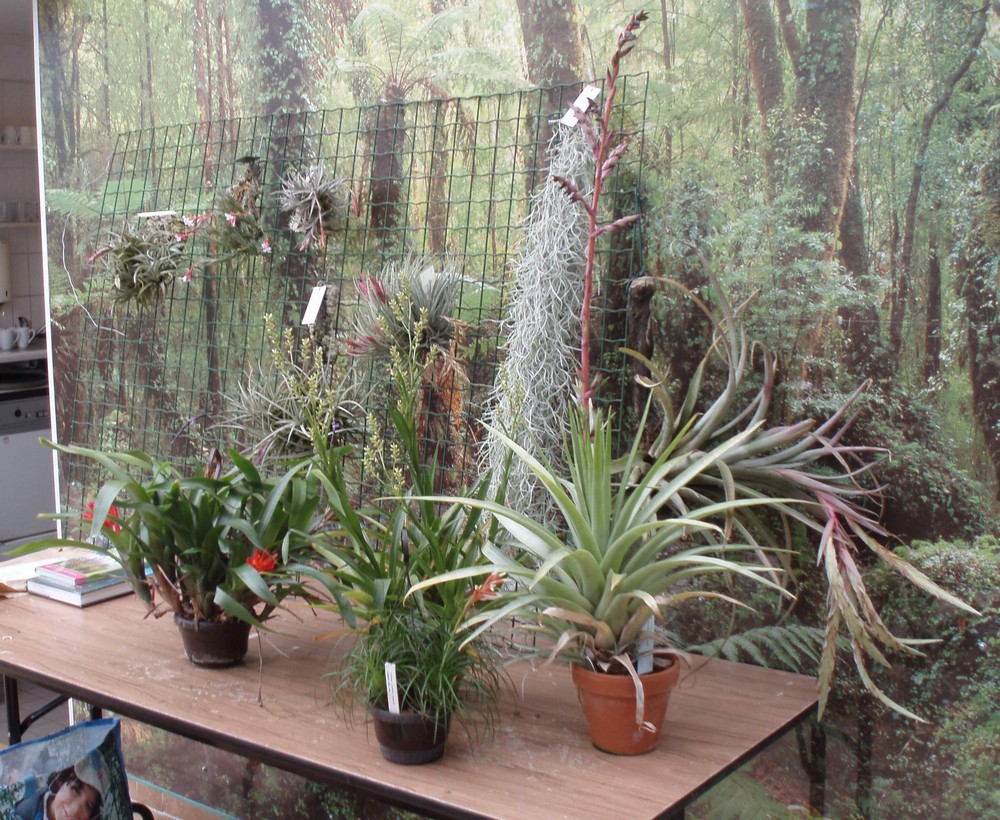 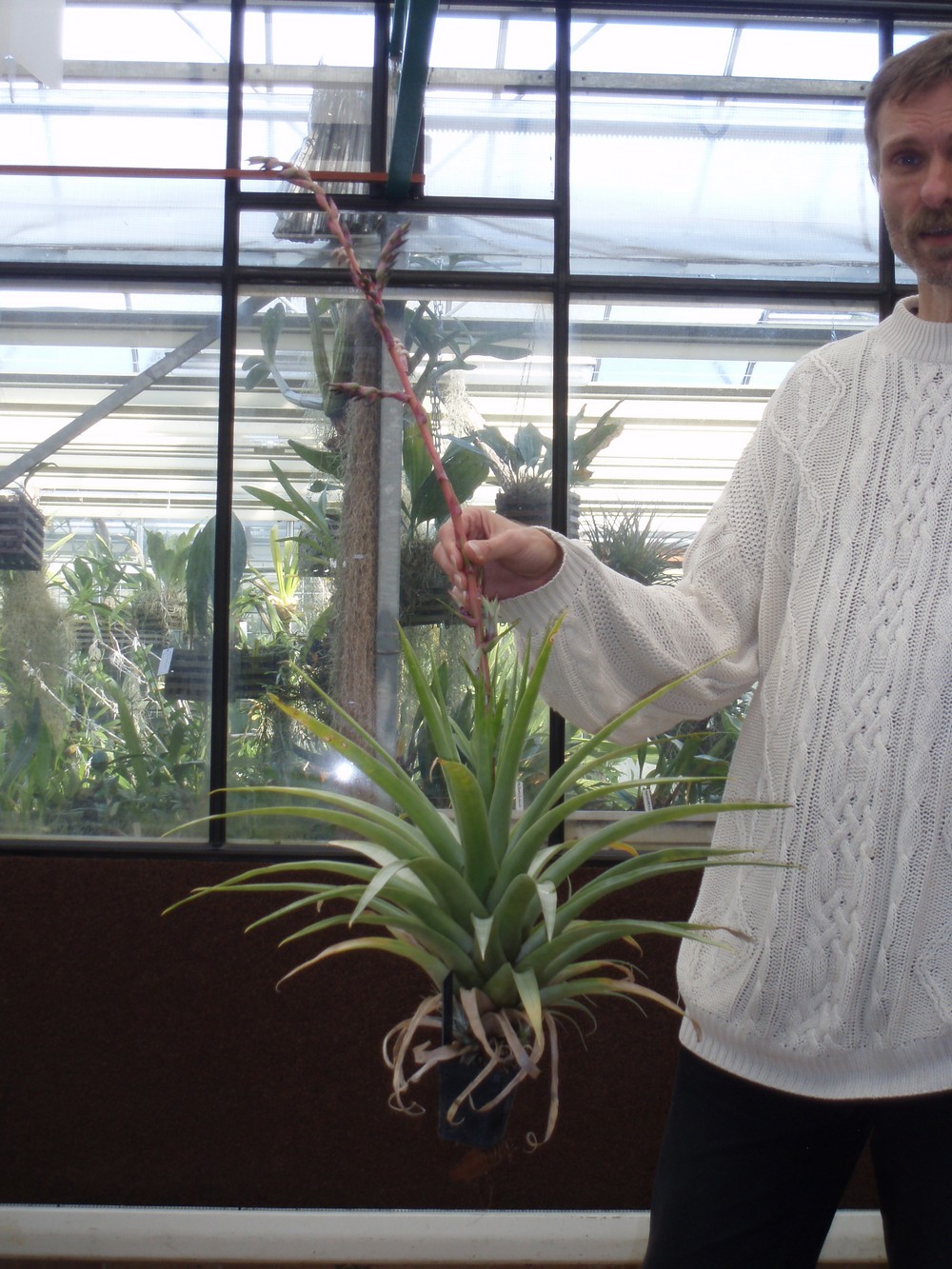 Plants to be discussed

Eric explained that a new version has been brought out of the Encyclopedia of Bromeliads, namely version 3.0 (2012). In comparison with earlier versions, this incorporates a lot of changes and additions, such as plant descriptions for all species, many newly-described species, many new photos, old photos and larger photos. Tabs have been added to keep information together, including plant descriptions, synonyms and so on. The result is really something and is the outcome of an enormous amount of work! It costs  25. Those who registered the previous version can get the update for  15. You can also turn in the old CD and pay the same. Translations from the English into Dutch (and into German, in particular for the descriptions) are possibilities but much of the information is language-independent.

The planned BCG excursion to the Botanical Garden in Ghent did not go forward due to insufficient interest. The main impediments were the impossibility of a weekend visit and the limited choice of days in September. We will now look into the possibility of visiting Burgers Zoo in 2013, perhaps combined with a visit to Ibes bromeliad nursery in Huissen.

A recent article from Die Bromelie, which gave a summary of all the bromeliad nurseries in Europe (mostly in Germany) and the USA, was brought to everyone's attention. This would be a very interesting list for anyone wanting to buy plants! One can join the Deutsche Bromelien Gesellschaft (DBG, the German Bromeliad Society), but it is probably possible to buy a single issue from the DBG secretariat. Contact Roel Tomassen for more information.


Concerning José Manzares' book on Tillandsias, Eric observed that it was unlikely that the book would come out in 2012. Work on the genus Racinaea is almost finished but there are still some new species to describe.

At the end of the house-keeping meeting, Eric Gouda discussed several plants brought by members, followed by some bromelias from the Botanical Garden's collection. Special attention went to an extremely small example of Vriesea chrysostachys, which was showing signs of starting to flower. Other plants that were considered were: Quesnelia humilis, Pitcairnia species, Catopsis morreniana, Vriesea correia-araujoi, Tillandsia secunda (with very dark, black florets; Ecuador), Tillandsia copanensis (from Honduras), a coarser variety of Tillandsia usneoides, Tillandsia didisticha, which is probably a hybrid after all (T.didisticha x T.lorentziana), as it flowers with reddish-purple rather than orange bracts. 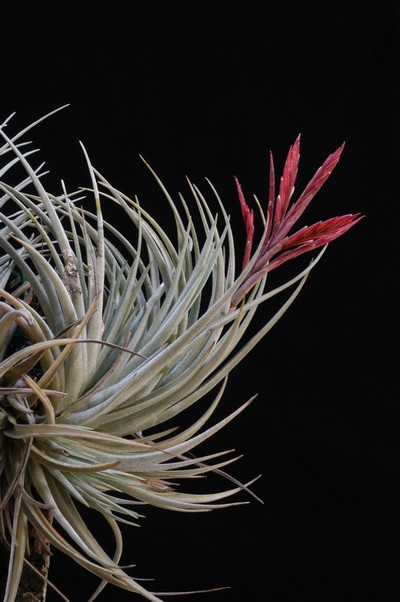 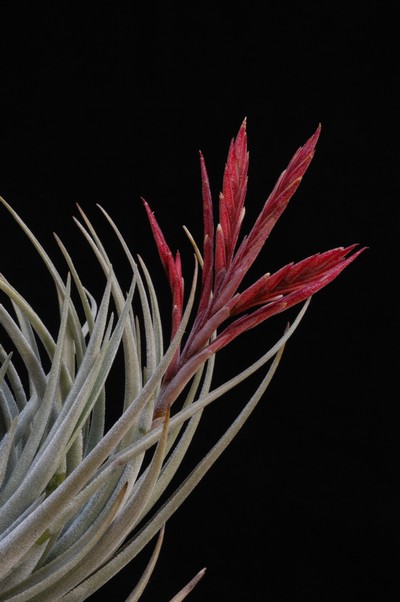 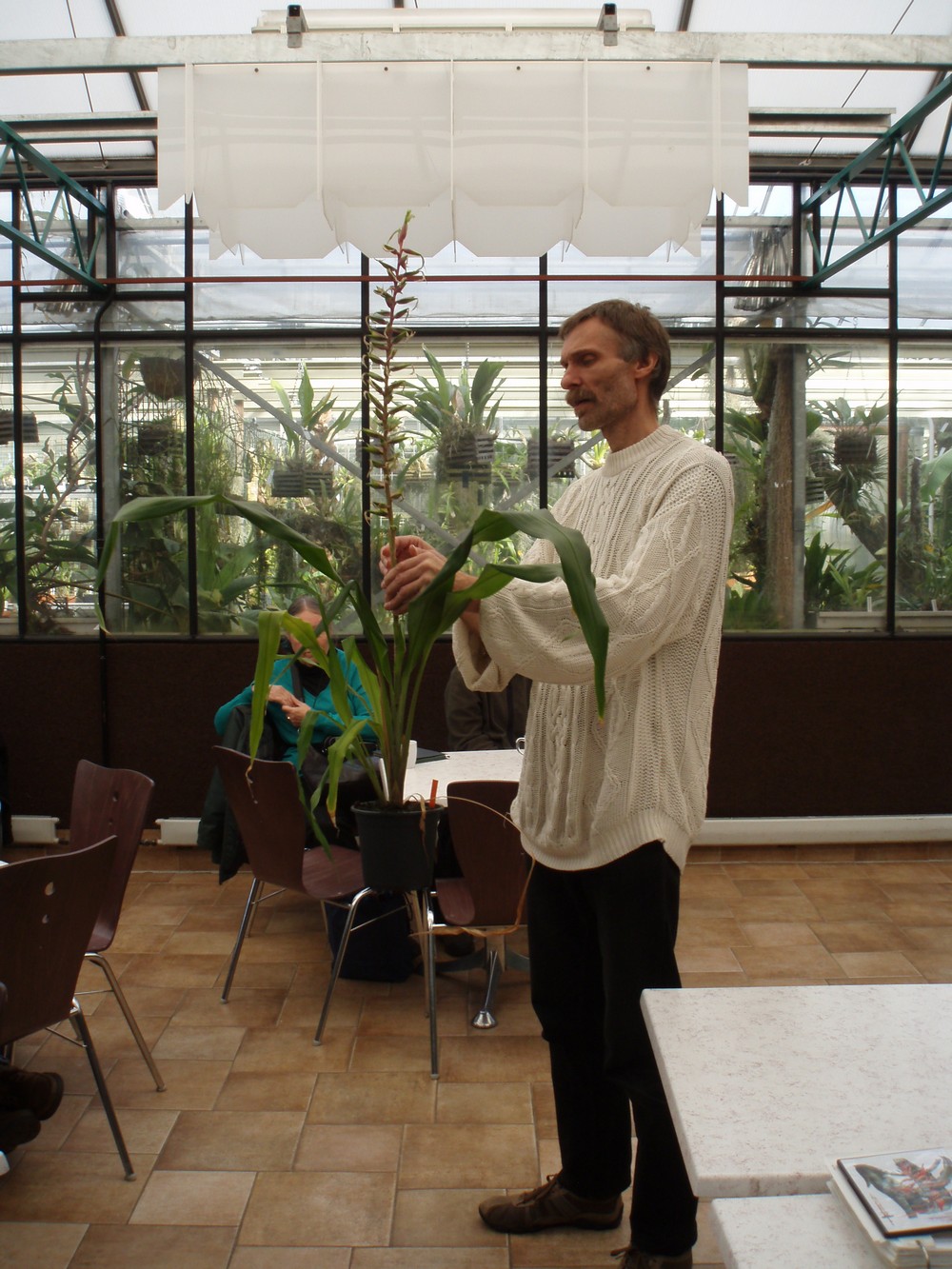 Further, Tillandsia cardenasii, Tillandsia tenuifolia, Tillandsia monadelpha, Catopsis species (possibly nutans but with white florets). The last items were two hanging braids made and brought by Gerard van Heusden. E each was about a meter long and 10mm Ø and had small and medium-sized cup-bromeliads (Neoregelia, Aechmea, Billbergia) attached all the way down. Amusing to see how these quite large plants had attached themselves to something that resembled a thin branch or twig. Gerard hangs them in half-shadow outside all summer and in winter hangs them in his shed.

During the lunch break there was a lottery for the plants brought by various members. Afterwards, Peter Bak (director of the bromeliad nursery Corn. Bak BV in Assendelft) gave us a fascinating talk about his visit to various bromelia nurseries in Canada and the USA (the West Coast and Florida) and his subsequent participation in the BSI World Bromeliad Conference, Orlandiana 2012 in September in Orlando, Florida. The slides he showed gave a pretty good impression of the way bromeliad growers go to work there: some very advanced, some in ways that seem out of date and sometimes rather old-fashioned. For us it was certainly interesting to see how growers in a warmer climate could manage with only horticultural mesh (which still let through plenty of light) in place of glass or plastic plates and that the sometimes high outside temperatures meant that a number of ventilation and cooling methodologies were used. Peter finished his talk about 16:30 with slides of some plant arrangements in the conference centre that had been provided by various Florida bromeliad societies and of some particularly beautiful pictures on display there. The chairman then thanked him very much on behalf of all of us present.

The end of another great day!

On behalf of the Board

There was some confusion about this name and it now turns out that the name is not unique. That is to say, different authors are referring to different plants using this name