The Spring Meeting in Utrecht on April 1st 2012.

On a fine spring morning about 25 of us met in the conservatory of the Utrecht Botanical Gardens. We spent the first hour or so (until about 11am) enjoying coffee or tea, admiring plants brought for display and discussion or for the auction and, of course, exchanging experiences of the past winter.

The house-keeping meeting then started, covering the usual subjects (attendance, finances, minutes of last meeting). During this, the BCG chairman, Eric Gouda, showed off the recently-published CD "Bromeliaceae, Belgique Horticole" of the beautiful illustrations made for the journal by the Morrens, father and son, in the period 1851 to 1885. See the website for more information. 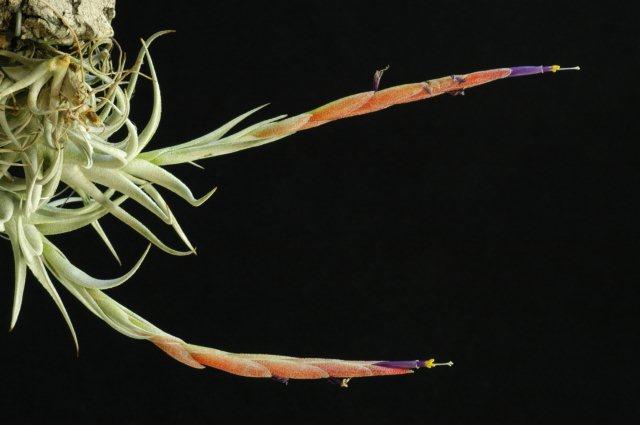 This was followed by further debate about the question of a BCG Forum in addition to the existing mailing list. In January 2012, the Board had received a discussion paper from member Nico Bouthoorn about creating a Forum.

This was distributed via the mailing list and a number of reactions were received from members, varying from "don't do it, unnecessary" to "do it but ... not like that" and so on. The chairman considered the options and shortly before this meeting told the members his conclusions. There could be a need for a flexible sort of documentation, with which members could help one another, as well as for a forum-like discussion site. A wiki from the Botanical Garden could be used as a test.

This already contained cultivation instructions for the Bromeliaceae from the firm of Corn. Bak (the tables in it were not completely correct). It would therefore form a basis to which members could add other subjects. Users of a wiki are free to write whatever they like, in whatever way. They can ask questions, provide answers, put up photos, tell about their experiences, describe visits etc., so generating discussions.

It was then asked whether the scope could be broadened, to be accessible to everyone including non-members. Examples of forums from other societies, such as the Gifkikkerportaal (Dendrobatidae Nederland) and the Deutsche Bromelien Gesellschaft (DBG, the German Bromeliad Society) were instanced along with the question of why our own BCG could not try to join up with them. However, this was not accepted generally as a good idea and, for more general forums, if one is primarily interested in bromeliads then all other information may be seen as an annoying distraction.

According to the chairman, the wiki would give us, as a small society, good opportunities, better ones than with a forum, to find (back) particular bromeliad data. He invited the members to think about the suggested Wiki-document and to try to put some things, that up to now were usually brought to our attention via our surfnet mailing list into the wiki as well. Peter Bak's article about fertilisation would make a nice opening gambit for this but items about exchanging seeds and plants might go here too. It can all be evaluated later. This was then agreed.

The next item was the question of the next BCG outing. The suggestion had been to visit the Botanische Plantentuin (Botanical Gardens) in Ghent in early September. There turned out to be some restrictions on possible days (first two weeks of September, weekdays only) which made it difficult for many people and it was agreed to consult the full membership by emailing a letter so as to see whether or not there would be sufficient interest.

The secretary told everyone that the DBG was once again organizing a joint plant order (import) from Michael's Bromeliads, Florida, USA. For those interested, it is necessary to be a member of the DBG and to contact either Andreas Böker or Uwe Scharf before May 1st 2012. See the Deutsche Bromelien Gesellschaft website for more information.

The chairman then showed the latest issue of the DBG's Die Bromelie, an excellent magazine, certainly one for the hobbyist.

This ended the house-keeping meeting, which was followed by Eric Gouda leading the discussion of the plants on show. Ed Brinkkemper had brought Dyckia brevifolia, a Tillandsia species which Eric said was a variant of the species paleacea and Orthophyttum maracensis. Bert Westerman had Vriesea Philippo-Coburgii, Ronnbergia brasiliensis and Neophytum Galactic Warrior. Roel Tomassen had Vriesea X Mariae (V.carinata X V.bariletti). Eric Gouda himself then showed the flowering Tillandsia species straminea (which unlike purpurea is scentless), bermejoensis (from Bolivia), xiphioides var.tafiensis, mitlaensis var. tulensis, sucrei (grown from seed by Eric himself), humilis (with deliciously scented brownish yellow flowers), and finally the seldom seen species rubia (closely related to nana) with its relatively large pink flowers.

The lunch break included an auction of the beautiful plants brought by Bert Westerman and Peter Bak, together with some lovely posters and a few older issues of the BSI journals (Bromeliad Society International ) and of the DBG (The German Bromeliad Society ) magazine "Die Bromelie".

After the lunch break we all moved to the film room where Jeroen van der Steen took us all along with him again on a trip to South America. He combined beautiful slides with an captivating, lively narrative style to carry us through Panama, Cuba, Mexico, Guyana, Surinam & Peru. At the end of this afternoon, the chairman thanked Jeroen enthusiastically for his presentation while giving him a 'tasty' thank-you gift. From Jeroen we then heard the good news that there would be a follow-up occasion once he has sorted out all the images from his recent travels. We then all said good-bye to one another.

On behalf of the Board,